In our program two weeks ago, we presented the story of The Radio Scene on Four Little Greek Islands – Part 1, in which we told the story of Lesbos on the eastern side of the Greek mainland and Corfu on the western side of the Greek mainland.  In our program today, we present the radio story of two more of these little Greek islands, this time Zakynthos on the western side and Kastellorizo on the eastern side.

The island called Zakynthos is the third largest island in the cluster known as the Ionian Islands.  This island, with its high steep cliffs, grand rock formations and huge arches is formed in the shape of an arrow head, 25 miles long and 12 miles wide.  In ancient times, it was the source of tar which was found at the bottom of Lake Keri and which was used to waterproof the wooden planking on sailing ships.  The lack of sufficient fresh water is an ever present problem on this island.

These days, like so many of the Greek islands, Zakynthos is a popular tourist destination, and its Navagio Beach is described as the most spectacular in the world.  The beach at this location is hedged in between high cliffs, and the rusting hulk of a 1981 small smuggling boat still lies half buried in the white sands of Zakynthos.  Each day, some 20 tourist boats visit this location to allow their passengers ashore.

The only mediumwave station on the island of Zakynthos was inaugurated with 50 kW on 926 kHz in March 1959, two years after a similar station was inaugurated on nearby Corfu Island, as we mentioned here in our program two weeks ago.

Corfu is towards the most northerly of the Ionian Islands, and the one hundred mile distant Zakynthos is the most southerly.

Programming for this government operated ERT station on Zakynthos was a combination of locally produced information and music, together with a relay from ERT in Athens.  Beginning in July 1998, the local and national programing from these two ERT mediumwave stations, Corfu and Zakynthos, was co-ordinated to ensure the broadcast of adequate local information for all of these island peoples.

After a half century of on air service, ERT Zakynthos, with its 50 kW on the subsequently adjusted mediumwave channel 927 kHz, was finally closed in favor of a network of small FM stations.

The island called Kastellorizo is the easternmost inhabited island belonging to Greece, and it lies just one mile distant from the Mediterranean southern coast of Turkey.  Nearby are two smaller and uninhabited islands, named Strongyli and Ro, upon both of which is a small detachment of Greek soldiers.

In the era after World War 2, a Greek woman, (Despina Achladioti) together with her husband and mother lived on Ro Island, and Despina became famous for her daily flag waving ceremony using a Greek flag.  There is a lighthouse on Strongyli Island.

These three islands, Kastellorizo, Strongyli and Ro, are currently in the news due to high level discussions between the governments of Greece and Turkey regarding their future.  The largest population on Kastellorizo Island was around 10,000 during the 1800s, though today the population is around 500.

Kastellorizo Island is somewhat triangular in shape with a large wide indented harbor.  It is a popular tourist island, even though there is not one sandy beach along its coastline anywhere, though there are numerous sea caves, including their famous Blue Grotto.  In July 1944, a fire at a fuel dump spread and ignited a nearby ammunition dump that exploded and destroyed half the homes on the island.

On July 19 each year, the total population gathers to witness a local custom in which all of the men, and then all of the children, all fully clothed, jump into the sea.  They remain in their wet clothes all day.

The first radio station associated with Kastellorizo Island was not on the island, but rather at the island.  The international radio world is quite familiar with the famous radio ship Courier, on board which was installed the electronic equipment for a Voice of America relay station.  This ship carried two shortwave transmitters at 35 kW each, together with a mediumwave transmitter at 150 kW.

We are familiar with the fact that VOA Courier was stationed at Rhodes Island, though we are seldom aware that this important radio broadcasting ship was on the air on occasions at other locations in the Mediterranean.  Radio writer Paul R. McKenna tells us the story about VOA Courier and its visit to Kastellorizo Island.

In December 1962, the VOA Courier made a surprising 80 mile voyage eastward from Rhodes Island to Kastellorizo Island, off the southern Mediterranean coast of Turkey.  On board the Courier was a high level religious and political delegation which included the Archbishop of the Greek Orthodox Church and the governor of the Dodecanese Islands, both from Rhodes, and also a troop of Greek Boy Scouts.

Approval for VOA Courier to provide this remarkable water taxi voyage across part of the Eastern Mediterranean had been obtained from the headquarters of both the American Coast Guard and the Voice of America in Washington DC.  We might also suggest that top government and White House officials in Washington DC had also granted their approval for this unusual project, even if perhaps they had not themselves required this event.

The Courier made an uneventful summer voyage from Rhodes to Kastellorizo, arriving at their destination in the afternoon.  There were several official events on the island to welcome this delegation of religious and political dignitaries.  Official black and white photographs of these events are lodged in the Courier files at the Library of Congress in Washington DC.

That evening, VOA Courier was on the air again, this time from their new and very temporary anchorage just off the coast of Kastellorizo Island.  Does anyone anywhere in the world hold a QSL card that verifies the reception of VOA Courier at Kastellorizo for its one night of operation dated December 20, 1962?

During the evening a strong wind began to blow and there was apprehension that the Courier might be driven against the rocky shore.  To make matters worse, the crew feared that their anchor had become entangled with an underwater electricity cable connecting the Turkish mainland with the Greek island.  Right at midnight, all of the lights on the island and on the mainland nearby were extinguished.  However, fear not, this was not an international crisis.  They discovered later that the ship’s anchor had entangled with the underwater wreckage of a small boat; and every night the power generator on the nearby mainland stopped generating at midnight, every night.

In addition to the short visit by VOA Courier, there is one other radio broadcasting station on Kastellorizo.  In 1996 a small FM operation began, on 104.3 MHz.  This local station is still on the air to this day, and it identifies on air as, just as you would expect, as Kastellorizo Radio.

This feature was written by Adrian Peterson and originally aired on Adventist World Radio’s “Wavescan” DX program of December 13, 2020 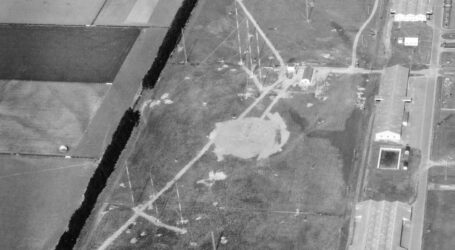