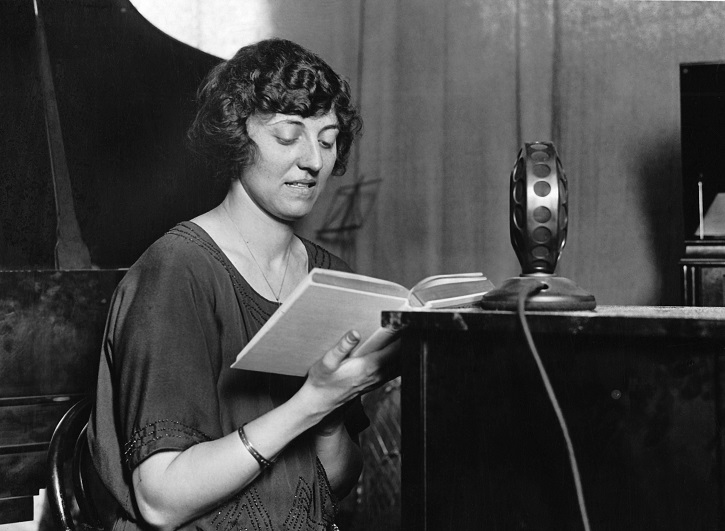 In 1922, Jesse Koewing was one of the first announcers at WOR in Newark (later New York City). She identified herself on the air with just her initials “J. E. K.” View additional photos in the image gallery at the end of this story. Credit: Author’s collection

Here are some of the women who excelled in U.S. radio in the first half of the 20th century

Before the dawn of broadcasting, women were frequently hired as wireless operators, and so it was not a surprise that women’s voices were heard as announcers and program hosts in the early days of broadcast radio.

Sybil Herrold was perhaps the world’s first disc jockey; she played Victrola records on her husband Charles Herrold’s experimental station, which broadcast in San Jose from 1912 to 1917.

In Boston, Eunice Randall’s voice was heard on a variety of programs over AMRAD station 1XE (which became WGI in 1922). In New York City, WOR audiences regularly heard Jesse Koewing, who was identified on the air only as “J.E.K.” while Betty Lutz was the popular “hostess” heard on WEAF.

Additionally, women were frequently hired as “program managers,” responsible for booking the live entertainment that filled their stations’ airwaves, and they often came before the microphone to introduce the entertainers.

But, by the start of the network era in the mid-1920s, there came to be a prejudice against women’s voices on the radio.

Broadcasters complained that the tone quality of early receivers and speakers made women’s higher-pitched voices sound shrill and dissonant; but this prejudice remained even as higher-fidelity receivers became available in the early 1930s. The conventional wisdom was that “audiences don’t like or trust women as announcers” and “only male voices can speak with authority.”

An audience survey conducted by WJZ in 1926, with 5,000 respondents, determined that listeners of both sexes preferred the male voice by a margin of 100 to 1. In 1934, an article in the Journal of Social Psychology concluded that “the male voice is more natural, more persuasive and more likely to arouse interest over the air than the feminine voice.”

In 1935, Cantril and Gordon Allport published “The Psychology of Radio, and determined that 95% preferred hearing male voices over the radio.

This prejudice against female announcers was expressed by station managers of the day. In a letter to the editor in Radio Broadcasting Magazine, a station director wrote that “for announcing, a well-modulated male voice is the most pleasing to listen to. I have nothing against a woman’s announcing, but really do believe that unless a woman has the qualifications known as ‘showman’s instinct,’ it really does become monotonous.”

Another station executive from Pittsburgh wrote, “I would permit few women lecturers to appear [on the radio]. Their voices do not carry the appeal, and so whatever the effect desired, it is lost on the radio audience. Their voices are flat or they are shrill, and they are usually pitched far too high to be modulated correctly.”

As a result, by 1930 women’s voices had virtually disappeared from the airwaves, except for mid-afternoon programs aimed at the housewife and discussing such banal topics as cooking, fashion and beauty tips.

This was especially true in network radio, with rare exceptions.

In a notable experiment, NBC hired the vaudeville comedienne Elsie Janis in 1934 to be the network’s first female announcer, joining a staff of 26 men. But when listeners complained that a woman’s voice was inappropriate for serious announcing work, an NBC executive commented that they were “not quite sure what type of program her hoarse voice is best suited for, but it is certain she will read no more press news bulletins.”

Janis was relegated to announcing the weather and variety shows, and seems to have left NBC within a year.

Over at CBS, they paired radio actress Bernardine Flynn with Durward Kirby to host a daily newscast. But Kirby was assigned to read the “hard” news stories while Flynn reported only the “human interest” items.

Perhaps the only woman to break the taboo on women reporting serious news stories during the network era was Mary Margaret McBride.

She began her radio career on WOR in New York in 1934, taking the air name Martha Deane and playing a grandmotherly-type woman who dispensed philosophy and common sense. In 1937, she moved over to the CBS network under her own name, and became recognized for her interviewing capabilities.

Her daily afternoon program included high-level politicians, generals and movie stars. She moved to NBC in 1941, where her daily audience numbered in the millions. She remained a regular feature on network radio until 1960, and then continued in syndication.

World War II temporarily opened employment opportunities for women in radio, as the male staffs of the networks and local stations were siphoned off by the armed services.

But sadly, just as occurred in manufacturing plants, when the men returned home after the war the jobs reverted to men who “had to support their families,” and the women were told to go home and be happy homemakers.

In the 1950s, as the radio industry adapted to the new competition from television, many radio announcers turned into disc jockeys, but the prejudice against female voices on the radio continued. The big-name deejays at local stations around the country were all men.

But there were a few exceptions. In 1955, Sam Phillips (of Sun Records fame) opened WHER in Memphis. Phillips enjoyed hearing women’s voices on the air, and he hired an all-female staff to run the station.

WHER operated from studios in a Holiday Inn motel, and this led to a spinoff program, sponsored by Holiday Inn. WHER personality Dottie Abbott, taking the air name Dolly Holiday, hosted an overnight program of easy listening music syndicated to stations around the country. Her soothing voice and soft music could be heard across the AM band after midnight almost anywhere in the country into the early ’70s.

In the late 1960s, FM station WNEW in New York City experimented with an all-female format. Allison Steele won an audition against 800 other women and began working there as a disc jockey. She stayed on when the format was abandoned 18 months later, and gained popularity as “The Nightbird.” Her overnight show drew an estimated audience of 78,000, and she was chosen by Billboard Magazine in 1976 as the “FM Personality of the Year.”

As the 1970s progressed, the barriers against hearing women on the air gradually faded away.

CHIC in Toronto and KNIT in Abilene, Texas, both had all-female deejay staffs, although the newscasts continued to be voiced by men. An all-woman format was tried at WSDM in Chicago, where Yvonne Daniels sharpened her chops before moving on to the AM powerhouse WLS in 1973.

Also in Chicago, Connie Czersin debuted on WIND in 1974. Maxanne Sartori played progressive rock at KOL(FM) in Seattle before moving to Boston to take the afternoon slot at WBCN(FM).

Donna Halper, whose written work has appeared in the pages of Radio World, played the hits at WMMS in Cleveland, where she was credited with discovering the rock band Rush in 1974. Liz Kiley started her career at WLAV in Grand Rapids in 1976, and within three years had moved up the ranks to WABC in New York.

The many who came after them benefited from the work of the women named above, and dozens of others, in challenging radio’s glass ceilings.

View four more historical photos in the image gallery below.

John Schneider is a lifetime radio historian, the author of two books and dozens of articles on the subject, and a Fellow of the California Historical Radio Society. He wrote here in June about the centennial of KNX.

Fireside Politics: Radio and Political Culture in the United States, 1920-1940, by Douglas B. Craig

“Dolly Holiday — A Dreamy Soothing Voice in the Night,” www.rumormillnews

“Mary Margaret McBride, American Journalist and Broadcaster,” by The Editors of Encyclopaedia Britannica