The history of the independent enclave on the northwestern edge of the island of Borneo, Brunei, goes way back more than two and a half centuries to the time in the 700s BC when migrant tribes from Vietnam left their ancestral homes and wandered across ocean and island until they came to the island that we know now as Borneo. More than a thousand years later, the land surrounding the Brunei estuary became a trading post with Chinese participation. After that, the area around Brunei was ruled from afar by the Hindu Kingdom located on the Indonesian island of Sumatra. Then, in the 1300s, the Sultan of Brunei ruled the neighboring areas, including all of the island of Borneo and up into the southern islands of the Philippines.

The modern era for Brunei began in 1839 when Englishman James Brooke arrived in neighboring Sarawak and afterwards became their ruling Rajah. In 1888 Brunei became a British protectorate, and beginning in 1906, Brunei was governed with a local British Resident.

On January 2, 1942, the Japanese landed in Brunei which they occupied for more than three years. In 1945 Australian forces made a return invasion; and fourteen years later, Brunei was granted limited autonomy as a self ruling state. At the time when the Union of Malaysia was formed, Brunei opted for independence, and this was implemented on January 1, 1984.

The independent British country of Brunei is actually composed of two sections, separated by about five intervening miles of the Malaysian territory of Sarawak. The total population is no more than one third of a million; the small capital city with the long name is Banda Seri Begawan with a population of 50,000; and half of their Gross National Product is derived from the export of petroleum and natural gas. In fact, there is no personal income tax in Brunei.

Two items of interest: Brunei owns four cattle stations in the Northern Territory of Australia to ensure a regular supply of beef products and the total area of these cattle farms is actually larger than the country of Brunei itself. And, the name of the island of Borneo is derived from the name of this state, Brunei.

The first wireless station in Brunei was a spark gap Morse Code facility that was erected in Brunei Town, as it was known then, in the year 1920. This station was established for the purpose of communication with a similar station located on the island of Labuan that is now understood to be a part of Malaysian Sabah. Two more Morse Code wireless stations were established in 1922 and these were located at Brooketown-Muara on the tip of the small northern peninsula, and at Temburong in East Brunei. The fourth wireless station was established at Belait in the southern coastal area in 1925. Just two of these stations survived and they were identified as VSJ in West Brunei and VSL in East Brunei.

As far as radio broadcasting is concerned, the earliest beginnings go back to the year 1947 when the Marconi Company in England installed a new wireless communication station in Brunei Town. Ten years later, the Marconi Company founded a small experimental radio broadcasting station in a small one storied building, with a single on air studio and a single mediumwave transmitter. This new and rather experimental station made its inaugural broadcast fifteen months later, in August 1958.

The 1959 edition of the World Radio TV Handbook listed Brunei for the first time and it showed two mediumwave stations on the air; 2 kW in Brunei Town on the north coast and 20 kW in Tutong in the central coast. Interestingly, both stations operated on the same channel, 1240 kHz.

However, in the following year, 1960, three mediumwave stations were on the air; Brunei Town with the original three year old 1.5 kW transmitter now on 970 kHz, the 20 kW transmitter at Tutong on the same 1240 kHz, and an additional station at 1.5 kW on 1110 kHz at Belait on the south coast. Over the next half century, several new mediumwave stations were constructed, transmitters changed locations and frequencies, and new higher powered units for local coverage were employed. In fact, at the height of its activity, Brunei was on the air from seven different mediumwave transmitters at five different locations. Two of these high powered units were installed in 1977 for national and regional international coverage. The 100 kW station (later 200 kW) on 675 kHz was installed at Serasa, and the 200 kW unit on 594 kHz was installed at Tutong. Both of these high powered units could be heard quite clearly in the neighboring Malaysian and Indonesian states on the island of Borneo and beyond. It is understood that both of these 200 kW units were shut down a year or two ago, though they could be re-activated if necessary.

For total local radio coverage throughout Brunei, several FM networks are now on the air. Their modernized studio building, located across from the Post Office in Banda Seri Begawan, was erected in the 1960s. It contains a suite of 18 studios for the production of the various language and program streams.

Before leaving the local radio scene in Brunei, we should make mention of BFBS, the British Forces Broadcasting Service. They trace their earliest origins back to the year 1964 when a daily one hour program in English and the Gurkhali language was introduced into the program format of Radio Brunei mediumwave. This service was on the air from Radio Brunei for a period of nearly thirty five years, ending in 1997. It was heard throughout the nation on as many as six channels, mediumwave, FM, and shortwave. This program service was presented for the benefit of British troops stationed in Brunei, many of whom were Nepali and spoke the Gurkhali language. https://radio.bfbs.com/stations/bfbs-gurkha-network

A small volunteer radio station was constructed at the British army base at Seria on the south coast and it was on the air unofficially for a short period of time before BFBS took it over in 1978 and administered it from BFBS Hong Kong. This station was officially opened with its own facilities on March 8, 1979. It has always operated on FM, usually with two channels, one in English and the other in Gurkhali.

According to tabulated information extracted from the World Radio TV Handbook, the second shortwave transmitter was transferred from Tutong on the central coast and re-installed at Berakas near the capital city in 1977. However, both shortwave transmitters left the air, according to WRTVHB entries, in the year 1979. Some twenty years later, Radio Brunei made the statement that they did plan to return to the shortwave scene sometime, but, alas, that event has never been fulfilled.

We might also add, that the BFBS twin language program service that was carried nationwide on mediumwave by Radio Brunei was also heard on shortwave. According to the available schedules, the BFBS relay on shortwave began in 1965 on 4865 kHz, and in 1969 this service was then heard on 7215 kHz. This regular BFBS relay was on shortwave came to an end when the shortwave transmitters left the air in 1979.

As far as QSLs are concerned, the exotic card from Radio Brunei has always been a highly prized collector’s item. For the first five years, Radio Brunei verified by letter. Beginning in 1964, they issued a card that showed a map of Borneo and a Mosque, printed in yellow and green. However, in the late 1970s, they issued a new card that showed a photo of the capital city taken from the air with a map of Brunei superimposed.

The supply of those cards has also been exhausted. In the year 2001, I made an itinerary on behalf of Adventist World Radio to Kota Kinabalu in the neighboring Malaysian state of Sabah and while there I logged the two mediumwave outlets of Radio Brunei on 594 & 675 kHz. The QSL that I received from Radio Brunei, verifying these two reports was an AWR card that I had enclosed with the reports that was filled in by Radio Brunei with the reception report details. 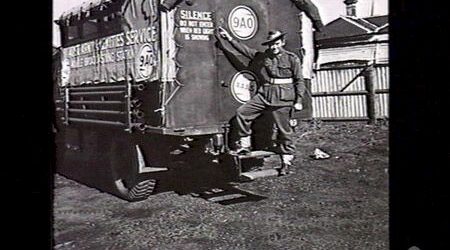