The last Thursday in March was the 14th anniversary of the inauguration of a large shortwave station in the United States. This station is WSHB near Cypress Creek in South Carolina, the station contains two transmitters at 500 kW, and it is still available on the market for sale.

Back about 15 years ago, the Christian Science organization constructed two large shortwave stations in the United States and they bought a third on the island of Saipan out in the western Pacific. These three stations were WCSN near Bangor in Maine, WSHB near the Atlantic coast in South Carolina, and KYOI a commercial station on Saipan.

The Saipan station, KYOI, was originally constructed by Japanese business interests as a commercial enterprise for broadcasting back to Japan in Japanese. When Christian Science bought this station, they changed the callsign to KHBI and used it as a relay station to Asia. In more recent time, this station was bought by the American govenment and it now carries IBB programming to Asia.

The station near Bangor in Maine went on the air as WCSN. It was sold a few years later and the callsign was changed to WVHA. This station was sold again, and it is on the air these days with World Harvest Radio under the callsign WHRA.

The shortwave station WSHB is located near Pineland in South Carolina and it was inaugurated on March 27, 1989 under the callsign WSHB. This station, with its two transmitters at 500 kW, is still on the air today with the same callsign, though it is available for sale to any organization that would like to procure it. The design and construction of the transmitter building allows sufficient space for the installation of an additional 500 kW transmitter.

Shortwave station WSHB is located on 380 acres in a pine forest area some 45 miles north of Savannah, Georgia. The antenna farm is made up of twelve curtain antennas, eight of which are slewable. The electronic configuration at the station is quite flexible and the output from each transmitter can be fed into any of the antennas.

The station also contains two power splitters which enable each transmitter to radiate through two antennas simultaneously. The antenna system allows for coverage into all four major directions, north, south, east & west, thus enabling coverage into almost every part of the world.

Station WSHB is the largest of the 26 privately owned shortwave stations in the United States and its territories. Programming from the production studios in Boston is delivered to the shortwave station by satellite.

Down there in South Carolina, the management and staff of station WSHB, under their chief engineer Ed Evans, are remembering their 14th anniversary. 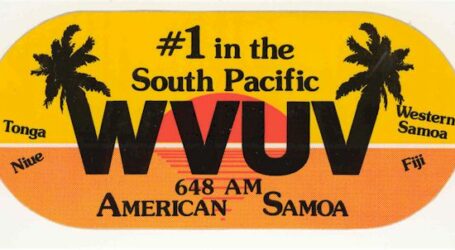