As part of the preparations for civilian air service from Fiji to the Cook Islands shortly after World War II, the Royal New Zealand Air Force (RNZAF) installed communications and radar services. I was involved with this work in Samoa, Tonga and Rarotonga, and, while in Apia, I decided to start up a radio station.

Although we had 5kW transmitters out at the Faleolo Airfield, we usually lost our telephone line to Apia because residents on the road to Apia had a more pressing need of wire to hold down their fale (local style house) roofs.

To avoid the panics when we had to start up a LF Homing transmitter on short notice, a 300 watt auxilary rig was installed at Pilot Point with a longwire antenna on about 450 kHz with 400 Hz tone keyed automatically with ‘AP…..AP’.

Having some time on my hands, I rigged up some relays connected to oscillator, buffer and final plate coils so that, with a switch, the transmitter could come up on either 450 kHz or 630 kHz. The audio section of these Collier & Beale transmitters was more than adequate, so, with a homebrew mixer, a mike and two turntables, “ZMAP” was born.

Local residents were very happy about this, but I had to sit in a hot dirty cubbyhole that made me unhappy, so I had a pair of telephone lines run to my bedroom upstairs at Aggie “Bless-Her-Heart” Grey’s hotel. There I could, with a repeat coil, operate the transmitter on 450 with keyed tone or 630 and feed program down to the transmitter when on MW.

I had a comfortable studio setup with a line down to Aggie’s back porch where nightly live bands provided ZMAP with programing after my news broadcast. News material was ardently gathered by my spies around Apia. Walter Winchell never had it so good. I also ran a breakfast program that amused Palangis (europeans) and confused the good local people.

One night, I was into the news when someone came into the room and sat down behind me. (Ever since, in about 120 studio installations, I’ve always set the console so that the DJ faces the door). As soon as I had the back porch on the air, I turned, and faced the one really big shot in Samoa, the Resident Commissioner, Lieutenant-Colonel F. W. Voelckner.

Fleeting scenes inside RNZAF prisons flashed before my eyes, illegal transmissions, were they listed in Aunty Mary’s books? But, No! The colonel said that he’d been listening to me regularly and realised that Samoa should have its official radio station, and, as he was due in Wellington the following week, he’d do something about it. The rest is history, 2AP came on the air a few years later with Colonel Voelckner opening the station.

However, there’s an interesting sequel. I’m quite sure that the New Zealand Broadcasting Service engineers making site surveys for 2AP were totally incapacitated with kava. Why would anyone place an AM station on top of a mountain where a large portion of the signal goes upwards, and where there’s no ground conductivity, and use a short tower so that even more RF energy radiates upwards, and use a high (1420 kHz) frequency that’s severely accentuated by the first hill or mountain. The only technical answer is kava.

A few more years passed and I was chief engineer for KCCN (1420 AM) amongst others in Honolulu, and I received a call from the local FCC inspector who wanted to pull a transmitter inspection immediately. We met at the site, and he paid particular attention to metering, and especially the antenna base meter for shunts.

Finally, he admitted that the State Department in Washington DC had received an official complaint that KCCN must be using illegal high power since it blanketed out 2AP even in Apia, and in daylight!

I gave the inspector the background on 2AP, and finally, I believe the U.S. Government offered technical assistance and equipment to the Samoan Government, but this wasn’t accepted. I later became very pally with Jim Moore, 2AP’s most able manager and director, and in spite of his requests for lower frequencies and lower sites, these weren’t granted until recently so that Jim’s organisation could provide the service that he always dreamed about.

The only radio station, whose call sign is “Radio 2AP” is located on the island of Upolu, and is about a mile outside the capital city, Apia. Radio 2AP is wholly owned by Government. It was established in 1947.

National programmes (on Channel 1) are carried on the following frequencies:

Programmes are bilingual (English and Samoan) from 6am – 5pm, and in Samoan only from 5pm – 11pm.

Channel 2 broadcasts in English on 1404 kHz. It commences transmission from 5pm – 11pm daily, except Sundays.

Where religious broadcasts on Sundays are required to be made from Savai’i Island, these are broadcast live via VHF link with the main studio in Apia.

The 10kW transmitter is located at Afiamalu, located at an altitude and some 5 miles from the main studio. For the future, it’s proposed to build a small studio in Savai’i for rural programmes and live coverages of any special occasion on that island. This will be manned by a Producer and Technician.

Radio 2AP is headed by the Director of Broadcasting, Tupai Joseph Brown. I’m responsible to the Minister of Broadcasting. The Broadcasting Department has a staff of 57 including announcing, technical, programmes, advertising and administrative staff.

On a 1999 QSL from 2AP, the current broadcasting operation was explained. The only regular broadcast is on 540kHz with 747kHz reserved for school and parliamentary bropadcasts. All other frequencies are inactive.

This is the second in our series of articles about radio in Samoa. Coming up shortly will be an article celebrating the official beginning of broadcasting over 2AP in 1947. In preparation is an article on broadcasting in American Samoa, including WVUV in Pago Pago, one of the original Mosquito Network Armed Forces Radio stations from WWII. The article will also cover ill-fated KBQN (585 AM), the 50,000 watt Pacific Beacon powerhouse planned as a sister station to Caribbean Beacon (690 AM and 1610 AM, Anguilla, BWI) and the short-lived Atlantic Beacon (1570 AM, Turks and Caicos Islands, BWI). Contributions about WVUV and KBQN welcomed. 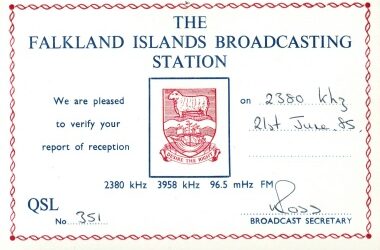